Home » News » Moving people beyond A to B

Moving people beyond A to B

Our goal is to ensure all customers feel welcome and safe on board the public transport services we operate.

We are immensely proud as the story of one of our employee’s actions in Wellington has made headlines in New Zealand and around the world for all the right reasons.

On a Thursday evening service from Wellington Railway station to Upper Hutt, a young woman was racially abusing other customers for speaking Hindi.

Our Train Manager JJ Phillips was alerted of the abuse and intervened, stopping the train at the next station and requested that she stop and apologise or she would need to  leave the train. After she refused, the police were called to take action.

JJ then apologised for the delay, telling the remaining customers that behaviour wasn’t acceptable in New Zealand – and she was rewarded with a round of applause.

In a radio interview on Friday, JJ told RNZ that she had no reservations about delaying the train saying, “when it comes to something like this, not at all. After what we’ve been through in March, there’s still tender feelings out there”.

“We don’t put up with language like that, of any kind. We carry passengers to and from A to B and we want our passengers to get there in a safe manner.”

Transdev has received several compliments about the way JJ handled the situation, including from Wellington’s Mayor Justin Lester who said he was “incredibly proud to be Mayor of this city” and thanked JJ and all involved for calling out racism.

Good job JJ! We are proud to call you a Journey Maker in our Transdev family. 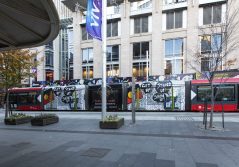